Screening For Life > Cervical > Get Screened

Screening uses specialized tests to find potential health issues or conditions before symptoms appear. The earlier cancer is found, the easier it is to treat.  It’s important to get screened using a Pap test regularly because the risk of getting cervical cancer doesn’t decrease with age — getting screened can save your life.

Who should get screened?

It’s important to begin having regular Pap tests starting at age 25, or 3 years after becoming sexually active, whichever is later. For example:

Remember that being sexually active doesn’t mean only intercourse. It refers to any skin-to-skin contact in the genital area, including touching, oral sex or intercourse with a partner of any sex. Once you start having Pap tests, you should continue having them until you’re at least 69 years old, even after you’ve been through menopause. Some women may feel they don’t need Pap tests. But you should still have regular Pap tests even if:

*If you’ve had a hysterectomy, speak to your healthcare provider about whether you still need to be screened.

No matter what, if you’ve ever been sexually active, it’s never too late to start having Pap tests.

How often should I have a Pap test?

Unless your healthcare provider tells you otherwise, here are some guidelines:

If you experience any changes between Pap tests, such as bleeding between periods, after sexual intercourse or after menopause, tell your healthcare provider right away.

Do I Really Need a Pap Test [brochure]

What is a Pap test?

A Pap test is the main screening test for cervical cancer in Alberta. A Pap test (or what some used to call Pap smears) checks the cells of your cervix, to make sure there are no abnormal cells. Abnormal cells can change over time and become cancerous without pain or symptoms. It’s a quick test done in your healthcare provider’s office or at a women’s health clinic. A sample of cells is taken from your cervix and sent to the lab. The lab checks the sample for any abnormal cells that may lead to cancer. A Pap test doesn’t test for other cancers or sexually transmitted infections such as chlamydia, gonorrhea or human immunodeficiency virus (HIV).

What to expect with a Pap test

Pap tests only take a few minutes and are done right in your healthcare provider’s office or at a women’s health clinic.

How should I prepare for a Pap test?

Before your Pap test, here are a few things to keep in mind:

How is a Pap test is done?

You’ll be given a gown or sheet and asked to undress from the waist down. Typically you’ll be asked to lie on your back on an examination table and put your feet up on stirrups or to bend your knees. Your healthcare provider will then gently insert an instrument, called a speculum, into your vagina so that the cervix can be seen. A small spatula or brush will then be used to collect a sample of cells from your cervix to send to the lab. While you may feel a little discomfort, it shouldn’t be painful. It may help to take a few deep breaths to relax and reduce tension in your body. Your sample will then be sent to the lab to be examined.

Watch this short video to learn more about what to expect during a Pap test (Credit:  BC Cancer Agency)

Benefits and risks of a Pap test

As with any procedure, there are both benefits and risks; you might think of these as pros and cons. It’s important to be aware of them before having any test so that you can make an informed decision. While no screening test is 100% accurate, scientific evidence shows that having regular Pap tests lowers your risk of dying from cervical cancer.

Benefits of getting a Pap test

Risks of getting a Pap test

Pap tests are generally very safe. However, as with any procedure, there are some risks.

Given how important it is to find cancer early, the benefits of having a Pap test outweigh the risks. However, it’s your decision. It’s always best to talk to your healthcare provider if you have any questions or concerns about the benefits and risks of Pap tests.

Where to get screened

All you have to do is make an appointment to have a Pap test at your healthcare provider’s or at a women’s health clinic. If needed, you can visit Where to Get Screened to find a location close to you to have a Pap test. 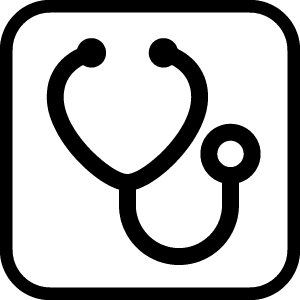 If you don't have a healthcare provider, check out these resources to help find one:

This section is being updated frequently based on stakeholder consultation and emerging evidence. Latest update May 2022

Who is eligible for cervical cancer screening?

If you have a cervix and 25 years or older or ever had sexual contact, it’s important to think about cervical cancer screening no matter where you are in your transition or regardless of your gender identity. Talk to your healthcare provider about what’s right for you.

Sexual contact includes any skin-to-skin contact in the genital area, including touching, oral sex or intercourse with a partner of any sex, or sex with sex toys.

The information below is a guide for whether screening may benefit you. 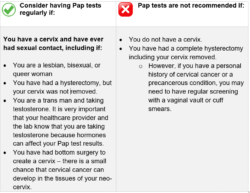 Some things to consider:

You may be at a higher risk of cervical cancer if you have a history of human papillomavirus (HPV) infections or have a condition that weakens your immune system, like HIV.

Remember to have Pap tests once every 3 years, even if: 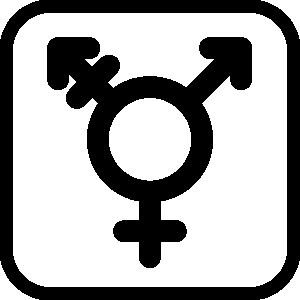 We recognize that gender diverse people or people on the trans masculine gender spectrum may feel uncomfortable with the terms “cervix and vagina”, or use different words for their body parts like “front hole.” We use these terms, in the interest of simplicity, in recognition of their limitations.

We use biological terms as a practice but patients have the right to request that their providers use different words for their comfort.

Results and Next Steps

where to get screened